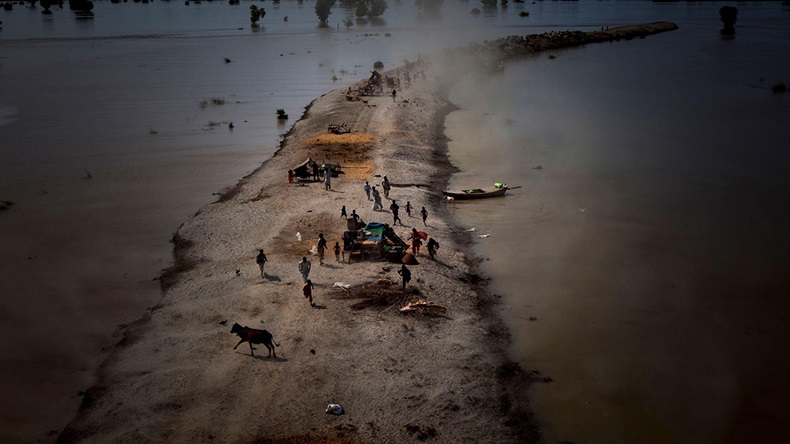 Source: REUTERS/Alamy Stock Photo The recent flooding in Pakistan has displaced millions of people from their homes

Summer of 2022 was not a calm time on the planet. Heatwaves and record levels of drought decimated European crops, wildfires blazed across France, floods inundated Australia and South Africa, and record monsoon rains have left a third of Pakistan under water.

Calculations released by Swiss Re revealed that losses from natural catastrophes reached $35bn in the first half of 2022, a figure which is 22% higher than the average for the past decade.

The good news is that global insurance resilience rose in 2021 to 54.4% from 54.3% in 2020, but behind these numbers are low levels of natural catastrophe resilience that has been reluctant to rise despite higher levels of growth in emerging economies.

The natural catastrophe gap has not closed in ten years, largely due to low levels of penetration in high emerging economies.

Part of the solution to bolstering natural catastrophe resilience in emerging economies is more and better private-public partnerships between governments and insurers, Christof Reinert, head of risk management partners at Munich Re, argues.

Reinert points to the recent flooding in Pakistan as an example where millions of people have been displaced from their homes due to record-breaking monsoon rains. “We believe there needs to be intense collaboration between the public and private sector to increase defence measures, such as irrigation or water management systems to fight droughts. Transfer risk mitigation and insurance solutions or investments in those areas to reduce risks to the public can be done with partnerships,” he tells Insurance Day.

Bangladesh’s investments in flood defences in coastal regions that help mitigate risks from cyclones provides one example of how partnerships can work. As reported by The Economist, residents have received money to help reinforce their homes from the threat of flood damage, and shelters have been built on higher ground that are single sex and that allow for animals, thereby making people more likely to use them.

Li Xing, head of insurance market analysis at Swiss Re, says there are multiple factors that pose challenges to expanding the private insurance sector in emerging markets which may include affordability, financial awareness and trust in insurance products.

Like Reinert, she also believes that one solution to bolstering resiliency are stronger private-public partnerships that could include different governmental measures to help increase private insurance take-up.

“Although there has been growth in natural catastrophe insurance in these [emerging] countries, the growth in the private insurance sector was not at the same pace as of the economic growth,” says Xing.

“Moreover, the natural catastrophe insurance penetration has been very low in the emerging economies. Thus, much of the large assets and infrastructure that were created are exposed and vulnerable to natural catastrophes but remain uninsured, consequently, resulting in low resilience.”

Government measures can include regulatory support for a stable insurance market, mandating coverage for certain lines of business, and encouraging financial awareness and tax incentives to promote insurance, Xing adds.

With the threat of climate change putting many businesses and homes at further risk of natural catastrophe, Reinert suggests that governments need to step in and mandate where further buildings can be constructed. If homes are built on flood planes or in low-lying coastal areas, schemes need to be put in place that help owners with insurance access and affordability.

“Areas need to be defined by where you can still build houses or not. In the future, it will be hard to get a bank credit to build new housing in high-risk areas. The discussions about climate change are making it more transparent that some homes are exposed to a high risk, and that will force the economy to react. It’s not a question of if, but when,” says Reinert.

For the time being, Xing at Swiss Re says that weather-related perils remain insurable but adds that a long-term understanding of the consequences of climate change are essential for strategic decision-making.

Regular adjustments for changes in exposure, as well as for natural hazards make climate change a manageable risk for the insurance industry, she argues, but careful monitoring of risk and loss development is essential to ensure weather-related risks remain insurable.

“The best way to keep weather-related risks insurable under the changing climate is to understand its dynamic nature and respond accordingly,” says Xing.

Reinert at Munich Re points to his hometown as one example of how this might work: “One of the older gates in Munich has flood marks which were quite high in the past. Then a dam has been built in the Alps to retain water to make the city more resilient, but that was an investment that took decades.

“That example shows that sometimes you need a lot of money and commitment to increase the public resilience to natural catastrophes.”