Climate change is expected to expand the pool of at-risk properties from 33% to 41% by 2040, generating $149bn to $183bn in new premiums but also increasing potential claims payouts

With increased investment in offshore energy assets, such as wind turbines, re/insurers and their clients need to understand and identify their potential exposures caused by climate change 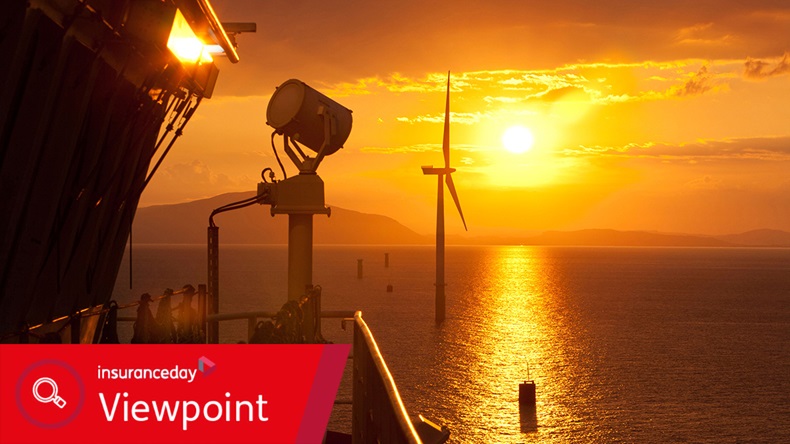 With inflation and energy prices rising in the wake of the Russia-Ukraine conflict, the various constituents of the energy ecosystem (which includes re/insurers and corporates) might be forgiven for thinking these are the primary risks to the energy market now.

That would be a mistake, however, as a present and longer-term systemic threat to the energy market and indeed the entire reinsurance market is climate change. Climate change is expected to expand the pool of at-risk properties globally from 33% to 41% by 2040, generating $149bn to $183bn in new premiums but also increasing potential claims payouts, according to analysis by Swiss Re.

The science is clear on climate change, as is explained in a recent report by the Intergovernmental Panel on Climate Change, which says worldwide greenhouse gas emissions must halve by 2030 if the planet is to stay on course to meet 2020 levels. The report has served as a rallying cry for companies and governments, spurred on by a more climate-conscious public informed by recent climate activism, that they need to cut emissions across the world’s continents.

The debate has moved up a gear, guided by actions taken at COP26 in Glasgow last year, where leading financial institutions including insurers pledged they would put tackling climate change at the heart of their work. This led to the formation of the Glasgow Financial Alliance for Net Zero, representing 450 global firms and financial institutions with $130trn at their disposal and accounting for 40% of the world’s capital.

Before the background buzz of COP26, the insurance industry has been at the forefront of corporate efforts to tackle climate change. Allianz was one of the first insurers to restrict investment in coal-based business models in 2015 before limiting insurance on coal mining in 2018 with a view to withdrawing from the market completely by 2040.

Allianz has been joined by Munich Re and Generali in taking proactive steps to limit insurance on coal production. Furthermore, reinsurers such as Swiss Re and Scor have taken large steps to place underwriting restrictions on heavy emitters.

Also, many re/insurers are concerned reinsurance capacity alone cannot absorb the systemic financial risk posed by climate change. An alternative solution that has been floated by some re/insurers is for public-private partnerships backed by government intervention to narrow protection gaps around the world in the face of climate change exposures.

Offshore energy faces a particularly large exposure from climate change as extreme weather becomes more frequent. The sector has assets such as oil platforms and wind turbines installations that are exposed to damage caused by extreme weather, as outlined in a recent report by Chaucer.

The report says extreme weather could, in some instances, restrict access to sites in the wake of an event, delaying or hindering much-needed repairs. Manufacturers, the report argues, must evolve existing designs so they can withstand more frequent and severe catastrophic weather events.

At the same time, the insurance industry must work with customers to adapt to climate change and to understand the transformation that is placing the resilience of their infrastructure, facilities and supply chains under increased pressure if they are to remain viable. The connected climate change risk poses clear risks to the viability of the entire energy ecosystem, whose many participants are interconnected.

This is particularly important as the race towards “net zero” continues with more companies and indeed re/insurers restricting investment or underwriting to companies that do not have a net zero plan in place, as Allianz has.

The economics are clear with the global renewable energy market expected to increase from $900bn (its present valuation) to $2trn by 2030 according to ana­lysis by Allied Market Research.

John Maynard Keynes said “in the long run, we are all dead” and many may adopt that fatalistic approach regarding climate change risk, but the extreme events are occurring with greater frequency now, so this is not just an existential risk for the world 20 years down the line, but potentially for balance sheets today.

If part of the way forward is to make the transition to offshore energy assets such as wind turbines, then any solution needs to have at its foundation good, reliable data. Re/insurers and their clients can then understand and identify their potential exposures caused by climate change.

Suki Basi is founder and managing director of Russell Group