Viewpoint: Insurers need to step up to close the flood protection gap'

By Thierry Léger, Swiss Re

Thanks to recent advancements, insurers are more able than ever to take on flood risk, complex though it is 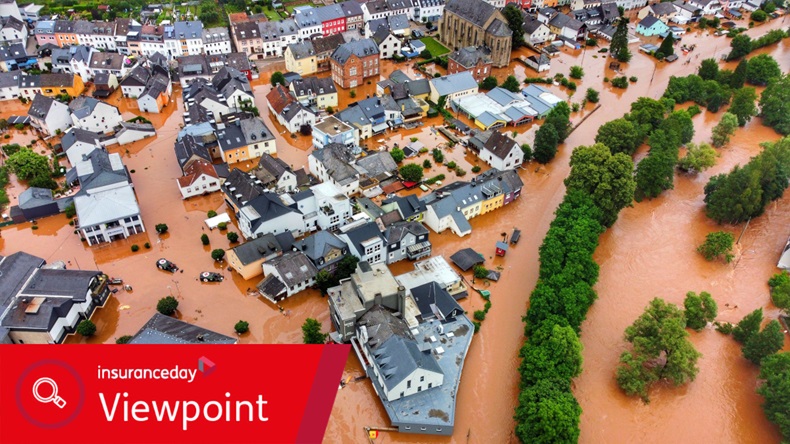 Floods affect more people across the globe than any other natural disaster, with the deadly floods that ravaged eastern Australia earlier this year a tragic reminder of the increasing threat posed by extreme weather events as the climate crisis deepens.

The financial damage caused in vast areas of Queensland and New South Wales could be extensive. Insurers are now processing thousands of claims from their policyholders and the costs underscore the challenges the industry faces from increasingly severe and frequent floods. While we categorise flooding as a secondary peril, this does not mean the impact is minimal.

Yet the events in Australia also highlight an opportunity for the insurance industry to help the world prepare for such emergencies and to recover when the water subsides. Over the past decade, 83% of global economic losses from flooding were uninsured, according to the Swiss Re Institute’s latest sigma report, Natural Catastrophes in 2021. Closing this protection gap must be a priority for the industry.

At Swiss Re, we believe flood risk is insurable. Risk assessment capabilities in the industry have advanced tremendously in the past decade. The task is to make use of these newly gained risk assessment techniques for flood, using the same rigour as applied to other dominant perils like hurricane or earthquake risk. Our research shows flood risk is particularly exposed to urbanisation and other human impacts to our environment, deserving particularly close attention to keep models up to date.

The industry is also well placed to invest in projects that improve flood defences. Insurers and reinsurers have liabilities that typically stretch out for decades and, as a result, we are always on the lookout for quality investments with long durations. This makes major infrastructure projects that protect against flooding a good match.

Let me give a little more detail on each of these points.

There were more than 50 severe floods around the world in 2021, causing $82bn of economic losses, the sigma report shows. These included the flood in central and western Europe (especially Germany) in July, which resulted in record economic and insured flood losses. There was also an extreme flood event in New York, which was hit by heavy rains that came with Hurricane Ida.

The frequency and scale of flood losses means it is time for insurers to step up by expanding coverage and bolstering the financial resilience of households, businesses and communities around the world. To make this happen, floods need to be given the same attention in exposure data capturing, accumulation control and risk modelling as the state-of-the-art approach applied to earthquake and hurricane risks. After all, the potential losses from single flood events today can equal or exceed those from primary peril events. The good news: modelling capabilities for flood insurance risk have been catching up over the past few years.

Insured losses from last July’s floods in Europe totalled $13bn. This is only the second time the bill from a single flood event has exceeded $10bn – the other being the flooding that hit Thailand in 2011. Yet there is no reason to think we will not see damage on this scale again, given the increasing frequency and severity of flood events.

The frequency and scale of flood losses means it is time for the insurance industry to step up by expanding coverage and bolstering the financial resilience of households, businesses and communities around the world

Economic growth and the rising numbers of assets in areas exposed to flood risk are the main drivers of growing flood-related losses, the sigma report shows. Many of the world’s mega-cities are located in low-lying coastal areas that are vulnerable to flooding.

Urbanisation also boosts flood risk by covering natural surfaces with housing, roads and other developments. This process, known as soil sealing, generates fast water run-off and makes flash flooding more likely. Ageing and inadequate infrastructure also plays a role. In the case of Hurricane Ida, New York’s transportation system was inundated by the rains that came in the wake of the storm.

Climate change is another major driver of flood risk. The warming climate is increasing the amount and intensity of rainfall and making extreme events, such as floods, more likely.

Our research has shown a particular sensitivity of flood risk to urban development and other risk trends. The industry needs to stay vigilant to capture today’s – and not yesterday’s – level of risk. Again, the good news is today’s models allow us to factor in trending factors.

To account for this mounting risk, the insurance industry needs to recognise flooding qualifies for primary peril status and should be assessed accordingly.

Insurers are experts in assessing primary perils. The industry has developed robust exposure data, risk modelling and risk management practices for these perils, most notably hurricanes, earthquakes and windstorms. For flood risk, while models have become increasingly available, there remains scope for improvement. This is about explicitly collecting flood exposure data in key markets and sharing and modelling the data for accumulation control and explicit cover design and risk transfer.

On top of this, we need to improve the communication of flood risk around the world – within the industry, to customers and among regulatory bodies – to help design effective mitigation plans. The Net-Zero Insurance Alliance is a good example of how to galvanise the industry for a common purpose. The alliance, co-founded by Swiss Re, supports its members as they decarbonise their underwriting portfolios and calls for a science-based and socially just transition to net zero.

Insurers and reinsurers also have a role to play in helping to finance the building and renovation of critical flood defences, especially when it comes to investing in green bonds. Again, a wide gap exists here between emerging and developed countries. In emerging markets, there is an infrastructure investment opportunity that could reach close to $1trn annually over the next 20 years.

As long-term investors, insurers can support the construction and upkeep of “grey infrastructure” such as dams, seawalls and canals, as well as the development of nature-based solutions, including engineered flood plains and sand dunes.

Insurers can also help make these projects more feasible and investable, starting with sophisticated risk assessment. They can cover the risks inherent in the construction and operational phases of infrastructure projects. And they can design affordable and practical insurance products to transfer the remaining financial risk flooding poses away from businesses and homeowners.

Flood risk is complex. It is also insurable. By stepping up to tackle this risk, insurers and reinsurers can help the world prepare for accelerating urbanisation and the impact of climate change in the decades to come.

Thierry Léger is group chief underwriting officer at Swiss Re